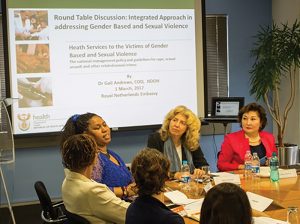 The UN Office on Drugs and Crime (UNODC) supports the launch of an integrated and comprehensive National Dialogue by the South African Department of Justice and Constitutional Development with key stakeholders in an effort to address Gender-Based and Sexual Violence in the country. The development comes after a roundtable discussion held on the 1 March 2017, hosted by the Royal Embassy of the Netherlands and UNODC with attendance by representatives from relevant South African governmental departments, civil society organizations and development partners. While there is significant progress being made toward women empowerment, Gender-based Violence has reached “pandemic proportions” in South Africa.

The aim of the meeting was to discuss the challenges that have led to the increase of Gender-based violence in South Africa as well as mapping a collaborative way forward in reducing the scourge. Ambassador of the Kingdom of the Netherlands, H.E. Ms Marisa Gerards, highlighted the severity of this issue saying that “sexual and gender based violence is a serious global concern which undermines health, security and the dignity of women and that for it to be addressed effectively,  it needs a holistic approach of all relevant stakeholders.”

Deputy Minister for Department of Social Development, Ms Hendrietta Bogopane-Zulu said that while a lot has been written about GBV experiences, society and professionals need to examine the driving forces of gender-based violence such as behavioural changes, unemployment, culture, poverty, children growing up without fathers and women being economically dependent on perpetrators of violence.

While South Africa has implemented numerous legislative and policy interventions to combat gender-based and sexual violence as well as establishing Thuthuzela Care Centres and Sexual Offences Courts, the fight against gender-based and sexual violence has remained high on Government’s agenda, according to the Deputy Minister of Justice and Constitutional Development, Mr. John Jeffery. Mr. Jeffry’s added that despite the policies and initiatives in place, many people are this not familiar with how the courts system work and that the “thought of going to court evokes feelings of fear and anxiety and contributes to the under-reporting of gender based violence and hence lack of data.

According to his department, in 2015/16, some 51,895 sexual offences were recorded in South Africa. UN data reveals that in the majority of countries with available data, less than 40% of the women who experience violence seek help of any sort.  Among women who do, most look to family and friends and very few look to formal institutions and mechanisms, such as police and health services. Less than 10% of those women seeking help after having experienced violence sought help by appealing to the police.

Other key stakeholders included representatives from the Judiciary, the South African Police Services (SAPS), the Department of Health and the Legal Resource Centre who all stressed the importance of the integrated approach in addressing Gender-based and sexual violence, which would allow effective use of available national resources, cross-utilization of different initiatives and an active engagement of civil society in supporting victims of GBV.

For further enquiries, or if you would like to receive the full minutes and presentations of the event kindly contact: Bregje Wijsenbeek:  Bregje.wijsenbeek@minbuza.nl ; Tel: + 27 12 425 4559