People with disabilities rise to the #JerusalemaDanceChallenge 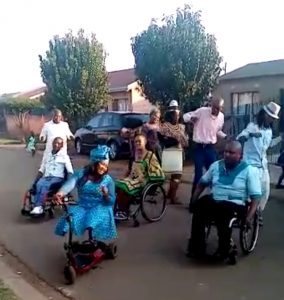 Persons with disabilities from Wheels of Change, a non-profit organisation that offers skills development programmes for people with disabilities, responded to the call from President Cyril Ramaphosa to celebrate and embrace Heritage Day on September 24, by joining the #JerusalemaDanceChallenge.

The participants were seen doing the dance in a video clip posted by their organisation on Facebook. It featured 10 dancers in three rows, four of whom were wheelchair users. The video was recorded in a street of Vosloorus, a township southeast of Johannesburg in the City of Ekurhuleni.

The secretary and board member of Wheels of Change, Pearl Nkosi (24), told ThisAbility that they faced many challenges during the course of their dance, which led them to put more effort to practise and it helped them to succeed with their dance.

“The issue of having to dance and keep to the routine while on a wheelchair was an issue but with more practice we managed to come on top,” she says.

Viewers of the video on Facebook were impressed when they saw people on wheelchairs doing the dance challenge. Wheels of Change CEO Thami Mankenkeza(37) says “It was great to read positive comments from the public reactions we received. We were overwhelmed as an organisation.”

Wheels of Change was launched in 2017 after founder Mankenkeza had noticed a need and a gap for skills development among people with disabilities.

The coordinator of Wheels of Change, Phumzile Ntuli(38), told ThisAbility that through the #JerusalemaDanceChallenge she learned that everything is possible if you put your mind to it. “There is life after disability. Make sure you go out there, meet other people with disabilities, learn from them and make the most of it,” she says.