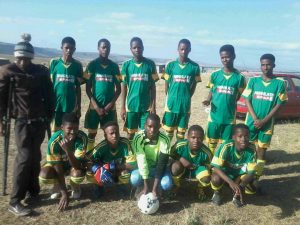 Coach Zono with his team

Sipho Zono is a 43-year-old soccer coach from Sutterheim, a small town in the Eastern Cape. He uses crutches for mobility and his body seems to be locked in certain angles from a mysterious illness that hit him when he was a teenager.

In 1997 while doing Grade 11, Zono got sick from a mysterious illness. Doctors sent him from hospital to hospital and, after countless blood tests and X-rays, they still had no idea what was wrong with him.

“I was in so much pain and I had to walk to and from school. My bones felt like they were on fire but I didn’t know what was happening,” says Zono. “No-one knew, even the doctors had a hard time diagnosing me. I spent months and months in different hospitals but I felt in my heart there was no hope. I asked myself a lot of unanswered questions: ‘Why me? What did I do to anyone to deserve this? They should just let me die.’ I knew that every dream I have had for myself was now just that… a dream, I wasn’t going to become anything in this life so I might as well be dead and buried.’’

Zono stayed indoors for three full years, only going out when he needed to use the bathroom. He was depressed and had given up on life. “I would send my younger brother to hire some video cassettes for me and watch them the whole day. I guess people heard about the movies I hired and they would visit me every now and then,” Zono recalls.

“Then it turned into every day and we would watch soccer together. I would comment on the players’ skills and the team formation and we even made bets on which team would win. The teams I betted on would always win and the boys slowly trusted my soccer knowledge skills and learnt to trust my judgement,” he says. “One day I lost a bet and instead of wanting their money back they said they wanted me to coach them instead. I thought never, they must be crazy; I am disabled and no longer can play soccer so how on earth am I ever going to be able to coach them. So I plainly refused.’’

Instead of giving up on him, the boys kept coming back and begging him to come watch them play, at least.

“Bear in mind, it’s been years since I left the house to go anywhere, there was no way I was going to go out for something I knew I would fail at,” says Zono. “One day I woke up and decided I was going to watch them play, then, after the match, rush home. I was nervous and scared; I was scared of what people would say to me and about me. The judgements and the pity stares. I was ashamed, I don’t know why but I was ashamed of having a disability as if I had chosen it. I went to the match and instantly remembered how it felt like to play and I was excited. The vibe was great and I decided right there I was going to coach them.”

Zono has made a huge difference in the lives of the teenagers in the Mlungisi Township by creating and coaching two other teams, Power Nations and Young Nations.

“I believe in peace and harmony. When I started these teams, the township was experiencing a lot of robberies and there was no peace on the streets. Since my involvement in helping the  zommunity, there aren’t many stories of crimes being committed as the people who were busy being up to no good. Some of them are now my players,” says Zono. “I am not saying I am a messiah – a lot of people are working tirelessly to keep the peace, but with sports we have achieved a lot in this community. We invite anyone who is interested in playing to come. Bored people get up to no good, so sports keeps them busy.”

His team has been on the Amahlathi Local Football Association for fours year. Thulani Simon, the captain of the team, says, “I was a troubled man and had no purpose, but ever since I met coach, I know I have family. He is inspirational. Where have you ever seen a disabled coach before who is so good at his job? Bafana Bafana would win if they’d hire him.”

Coach Zono says he is inspired by people who never give in and fight for what they believe in.

“Today I keep thinking about the years I wasted thinking I’d never amount to anything. Soccer is my life. I am in my element when I coach.”